Not For Sale Craft Lager

by Not For Sale Ale (brewed by Brouwerij De Molen)

This beer is something a little different in that it has been used as a tool to raise awareness for a very worthwhile international cause.

A gent by the name of Ulf Stenerhag is the CEO if a Swedish company called Thurne Technik.  He and is staff decided to take up a cause, and they thought using beer would be a good way to grab peoples attention.  In 2014 they partnered with Monks Brewery in Sweden to brew the first batch of Not For Sale Ale.

They’ve since partnered with other breweries around the world (including De Molen – hence our involvement), with 100% of profits from the sale of the Not For Sale beers being used for projects in countries where forced labour, exploitation and human trafficking are rife.  A conservative estimate is that this affects over 45 million people.

This beer is a very tasty, slightly hazy lager brewed by De Molen.  A crisp malt body is complimented by tropical fruits notes and citrus flavours from dry-hopping with Premiant and Cascade hops.  It finishes dry with a solid bitterness.

With the slogan ‘No One Is For Sale’ this worthy cause continues to build awareness and support.  Take a moment to admire the efforts of this organization while you enjoy your beer. 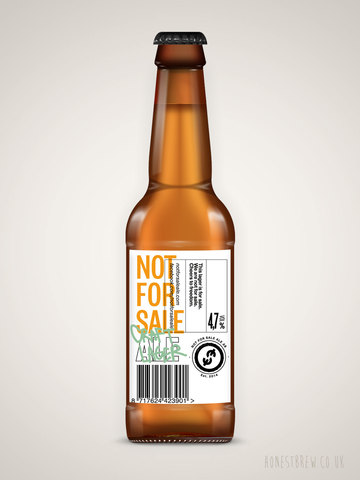