Another first in our beer packs from the fantastic Dutch brewery – Emelisse.  We’ll be featuring more beers from Emelisse in coming months, and they are all outstanding.The rauchbier pours a reddish-brown colour, and you immediately get the smoky aroma jumping out at you.

The flavour is full of peaty smoke like nicely smoked bacon, with a semi-sweet malt backbone and a little hop bitterness.  It is a really  well-balanced example of the style with the smokiness very forward, but far from the only attribute of the beer.

About the style: Rauchbier is a German translation meaning ‘smoke beer’.  It has a distinctive smoky flavour and aroma, as a result of using malts dried over open flames.    Kiln drying of malt results in a much less smoky malt character.  As kiln drying became the popular method in the mid-19th Century, the smoked beer style all but disappeared.The best known Rauchbiers are from the Bamburg area of Germany – in particular the Schlenkerla beers.  They have been makingrauchbiers for over 200 years! 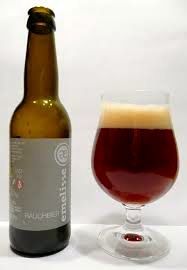