A German friend of ours is in the very fortunate position of having extended family who have a brewery in the town of Vilshofen in Bavaria.  He lucked in there!

So this month we have the Hefe Weizen, or Weissbier (White Beer) from the Wolferstetter brewery - a beer style native to southern Bavaria.  It is golden in colour, shining brightly in its traditional unfiltered form.  The nose presents typical notes of banana, pear, clove and crisp grainy malts.

There is a fruity sweetness, with banana plus a little orange citrus, and also hints of clove.  The carbonation seems to highlight the crisp wheat body, and slightly spicy bitter finish.

About the brewery:  A 200-year old Bavarian saying ‘Vilshofen and Schaerding, Traunstein and Erding, four places with the best beer in Bavaria’ references the brewing town.  The Wolfersterrer brewery is the last remaining of six breweries in the town.  Dating back to 1542, this brewery has been around for a while!

See all of the June 2014 monthly six pack 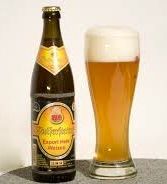