Once a year, the Troubadour boys make a single batch special edition of their flagship Troubadour Magma,  The first three years saw a simple change in the dry-hop, until yeast experimenation began with the 2014 special edition.

2015 sees the yeast focus continue.  At each of the three fermentation stages - main fermentation, lagering and bottle fermentation - a Brettanomyces yeast strain is added.

The result is a beer which is unrecognisable from the original.  We've included fresh Magma in this pack for the interesting comparison.  It just goes to show the significant role yeast plays in a beer!

The aroma is very fruity with grapefruit, mandarin and peach notes, and the Bretty funk laying over it all.  This follows through in the flavour which is more tart than sour.

Lots of crisp, sharp citric flavours, a little more sweetness of tropical fruit and of course the musty, funky Brettanomyces character presenting right through.  The beer is really quite refreshing, and not something non-sour drinkers should be fearful of.

Overall I think it is an interesting, complex creation.  It takes a little getting used to, but when your palette has done its best of reconciling what is going on with this beer, it is beautifully refreshing.  And way too easy to drink for 9.8%! 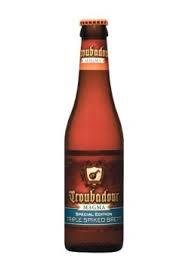