This is the newest addition to the Ganstaller range, from creative brewer Andreas and his daughter, Daniele.

Germany has the second most craft breweries per capita (16 per million population), with an average annual consumption of 104.1 litres per year.  And the area of Franconia in Bavaria has the highest density of any city in the world, with four breweries for only 1,352 people!

So if this Franconian brewery wants to introduce a new beer – and a lager at that – it needs a point of difference.

Commandarin is an unfiltered pale lager, dry hopped with a combination of Comet & Mandarina Bavaria hops.

The aroma gives up the nature of the hops, with a fruity nose of lemon, mandarin, peach and stone fruit.

The beer has a light grainy body with a little caramel malt sweetness, coupled with a citrus and flowery character that is not as obvious as in the aroma.  It finishes reasonably dry given the initial taste, with a pleasant lingering bitterness.

See all of the August 2017 monthly six pack 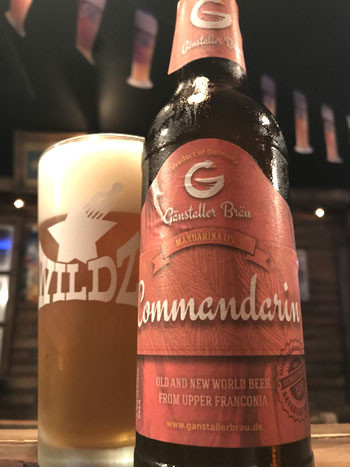