The Grimbergen label has a very long history, dating back to 1128 when the monks founded the Norbertine Abbey in Grimbergen.  It was twice destroyed during times of conflict, and ceased operations in 1798 when it was demolished during the French Revolution.

With such a chequered history, it is no surprise that the monks adopted the phoenix as a symbol of rebirth.   This symbol adorns the labels of all the Grimbergen beers, along with the tag ‘burned but not destroyed'.

The Maes brewery (a big player in the Belgian brewing industry) began brewing beer under the Grimbergen label again in 1958.  In 2008 Heineken took over Alken-Maes, though Carlsberg is given the rights to the label everywhere outside of Belgium.

So our beer is still brewed by Alken-Maes, while the Kronenbourg Brewery in France brews the beers for Carlsberg.

The beer is a delicious example of a Belgian dubbel style.  There is a pleasant dark fruit sweetness with rich caramel malts and a hint of spice on the finish. 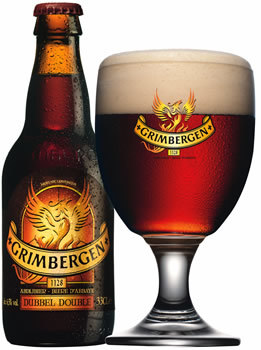