This is the second beer from our new mate Dany at Slaapmutske - his Dry-Hopped Lager.

A 5.3% low fermentation beer, it pours a bright golden colour, with a slightly hazy body and a small, tightly packed white head.  The nose is fairly subdued, but features crisp pale malt and subtle spices.

The dry-hopping is rather restrained, with just hints of grassy, floral hops.

Initially there is a bready sweetness from the strong malt backbone, joined by a refreshing hop bitterness with a slight citrus and grassy note.

Good carbonation aids in the crisp, dry mouthfeel and lingering hop bite.The dry-hopping has certainly not resulted in a strong hop aroma or flavour, as you would normally expect.  The result is a very easy-drinking Pils-style session beer; perfect for a summer afternoon.

Beer Fact:  This beer was originally brewed for the Spanish export market only, but has for the past couple of years been in regular production and now forms part of the core range.

See all of the April 2014 monthly six pack 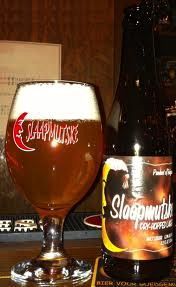 A delicious Belgian dubbel style ale, which was the first beer produced by Brouwerij Slaapmutske