I have a real soft spot for the beers of Brasserie Caracole.  It was one of our earliest brewery visits, tracking down virtually unknown breweries with the aid of only paper maps and an address with directions provided by another brewer.

And a fantastic recommendation it was; a memory which brings a smile to my face as I write the notes for this beer.

It is one of the last breweries in Europe to heat their kettles with an open fire.  The brewery really is a working historical display of how things used to be done, housed in the atmospheric stone and wood diary shed that is home to the brewery.

Caracole was the first beer produced by the brewery and remains the most produced beer from the portfolio.  It really is just called Caracole, with the ‘Ambree’ added to help distinguish it from the other beers

We will nominally label it an amber ale, largely thanks to its colour.  There is a lovely fruity malt body, caramel, brown sugar, raisins with a moderate hop bitterness and a strong Belgian yeast character.  It finishes slightly sweet, but with a prickly lingering bitterness.

See all of the October 2018 monthly six pack 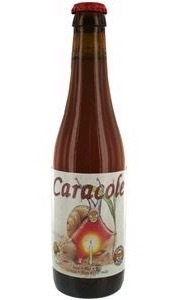