Most people know La Trappe as the Castle Trappist Monastery.  It produces a range of beers, some of which are easily found.  The Isi'dor is not so easy to find, but that is in no way an indictment on the beer.

It is a slightly hazy amber red colour, and has an active foam top.  There are lots of yeast esters in the smell - most strongly ripe fruits, notably pear and banana - a generous sugar or caramel aroma and a little hop note from the Perle hops used.

The flavour is full of sweetness early - fruits and bready malts, which gives a rich mouthfeel.  As the beer develops, some bitterness and spicing arrives to balance the sweetness.  It finishes rich and light, with a pleasant lingering aftertaste.

About the name: La Trappe Isi'dor was developed to commemorate the 125th Anniversary of the brewery in 2009.  The name pays tribute to the breweries first brewer monk, Brother Isidorus. 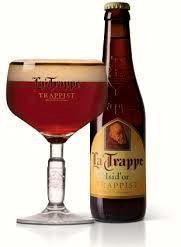