Troubadour Westkust is a Black Imperial IPA. It is a Belgian take on a US-led style, though with a twist, as it uses 100% Belgian hops.

The US importer was a massive fan of the Magma, and asked the brewers to make a dark version of the imperial IPA.  This is something that happens quite often, and given that the US is the major market for many of Belgium’s breweries, such requests are nearly always granted.

The surprise to the importer was the use of three Belgian west coast hops, rather than the US west coast hopping that was expected.  It really works with this beer though, providing much earthy hop notes.

It has a soft aroma of roasted malt, faint dark fruits and subtle hints of coffee and caramel.  The flavours are more pronounced and carry through from the aroma.

A little sweetness first with rich roasted malt and coffee in the background.  They combine perfectly to give a rich and complex beer, with a crisp and defined mouthfeel. The hops finally win through in the end, to finish with a pleasant lasting bitterness.

Availability : available for wholesale in 330ml and 750ml bottles and 30 litre key kegs. 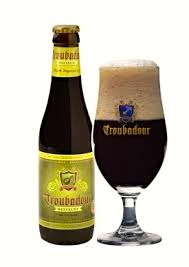