We’ve been waiting to get some of Verhaeghe’s special Christmas beer for a few years now, but have always been too late pre-ordering this beer in time for the Christmas container.  This year we were organised but the container was delayed!

I thought about keeping this beer til next Christmas, but that is a long while to wait.  And besides, this isn’t the most Christmasy of Belgian Christmas beers, so suits being included in the warmer months.

It is one of the rare blonde Belgian Christmas beers (I can only think of two others I’ve had), rather than the traditionally dark offerings that are much more common.

The beer is first ‘lagered’ for 14 days before a refermentation process.  It is then allowed to age until fermentation reaches the required alcohol level.  Lightly roasted malts give the golden appearance along with the bready malt flavour.

There is a slight fruit sweetness early on that is quickly overwhelmed by the hop bitterness along with some gentle herb and spice.   Wheat malts adds to the crisp mouthfeel, with notes of orange peel, lemon grass and a herbal minerality.

The finish is reasonably bitter, dry and slightly herbaceous with a little hint of alcohol warmth. 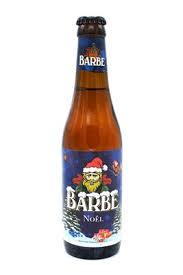 The renowned Christmas seasonal beer from the 'The Mad Brewers' - can stored for many years.