The Corsendonk name refers to the Priory of Corsendonk which was an important monastery over the centuries spanning 1398 to 1784, after which it was closed down thanks to the French Revolution.

It wasn’t until 1968 that the abbey was rebuilt as accommodation.  Later in 1982, it was decided to use the Corsendonk name to promote a range of beers. This is the process which gives rise to the term ‘abbey ale’.  There was no actual brewery in the Priory of Consendonk, so the beer making was contracted out to various breweries in the area.  Now, all of the Corsendonk beers are produced at the Brasserie De Bocq.

In Belgium, they refer to this as being just a beer brand, but that doesn’t mean the beer isn’t any good.  In fact the Corsendonk range of beers are renowned as being excellent examples of their respective styles.  The beer we feature is the Christmas Ale.

The beer is rich and smooth, with a big dark roasty caramel malt body, brown sugar, dried fruits, Christmas cake spices like clove,  cinnamon, licorice and a subtle hint of smoke.  A gentle alcohol warmth to suit the season, and a lingering dry earthy finish. 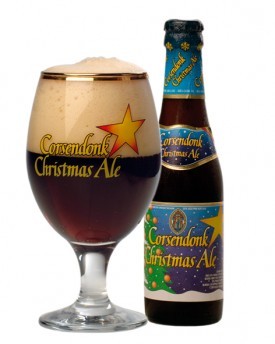