The brewers at De Molen are very active in doing collaborations, though most of the collab’s see the other brewers coming to visit De Molen.   But this beer involved a rare trip away for our De Molen friends – a journey to Bad Flash Beers in the outer suburbs of Prague in the Czech Republic.

They are a small brewery who also operate a couple of craft beer bars, import beers into the Czech Republic from the US, the UK and other parts of Europe as well as distributing beers from other small Czech breweries to the domestic wholesale market.  To say they are quite involved in the craft beer scene in the Czech Republic is an understatement!

The beer style chosen was a Baltic Porter, with added liquorice (a treat that was stated in The Netherlands). It has a big, robust, smooth body more akin to an Imperial Stout than a porter.  Flavours of chocolate, roasted coffee, sweet malts, rum and raisin and of course liquorice.

A great beer style well suited to the cooler climates of the Baltic States and Eastern Europe, but I reckon it goes OK here as well!

See all of the April 2019 monthly six pack 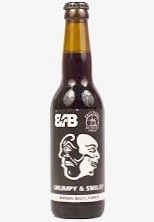