DOK Brewing The Eternal Sunshine On The Spotless Saison 8% (330ml)

I've got a few odds and ends left over from last years sour pack, so time to tidy up the shelves and find a home for a few of those awesome sour beers.

This is probably the longest name of any beer we've brought into Oz!

The Eternal Sunshine On The Spotless Saison is an 8% imperial saison that has been hopped up using Magnum & Nelson Sauvin hops, then finished with a French saison yeast.

It was a collaborative brew between a relatively new brewing in Belgium called DOK Brewing, and a customer of theirs - La Zorra Taphouse in Santa Cruz, Argentina.

Its a big and flavoursome beer, lots of funky yeast character in a grainy body with some peppery, spicy tingles in the aftertaste. 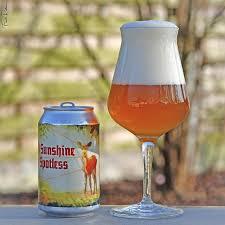 Price
$10.00
Availability
Members Only
Stock Level
Out of stock

A dry hopped Barley Wine of 10%

An easy-drinking Belgian Pale Ale with a hoppy bitter finish

Probably the most famous beer out of Belgium is the 'Westy 12'!