The Barbar Bok pours a dark amber to brown, with a slight cloudiness and a decent off white head.

An inviting aroma of sweet dark fruits and spices, compliment the bready Belgian yeast.  The flavour follows the nose with a combination of plums, raisins, caramel, toffee, cinnamon, coriander, clove and a little hint of the honey which is used in the brew.  A little earthiness from the hops and a slight warmth from the 8% alcohol content make for a very drinkable Bok.

Originally, this beer was only brewed in the winter months, and was called 'Winterbok'; but is now produced year-round.

The honey used originates from Yucatan in Mexico.  It is said that pairing the beer with a dish containing honey will really bring out the flavour in the beer! 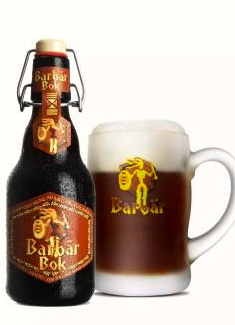 A strong blond ale infused with honey, hinting at the old style mead with a Belgian touch.

A Belgian tripel, but one that is a little different