Mont Des Cats is a trappist abbey in Northern France, a few kilometres from the Belgian border.  They do not have a brewery in their monastery, so their beer cannot show the Authentic Trappist Product logo.  But it doesn’t get much closer – they have their beer brewed by the monks of Chimay!

Developed independently to the Chimay range, the beer is a lovely copper colour.  The link to Chimay is evident in the distinctive Chimay yeast character, in both the aroma and taste.

A pleasant caramel malt sweetness introduces the beer, being joined by hints of dried fruits, gentle spices and an earthy, herbal hop character.  As the beer progresses, the bitterness seems to build toward a nice lingering finish.

See all of the October 2014 monthly six pack 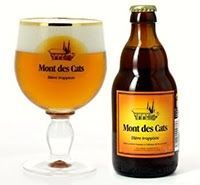