University students can create some interesting concoctions in an attempt to find their happiness while on a budget.  And this beer has the Belgian students to thank for its introduction.

Years ago, a group of university students created a beer cocktail by mixing equal parts the 12% Bush Amber (Scaldis), which was then Belgium’s strongest beer, with a 4% Timmermans Peach Geuze.  Easy to drink, and not too harsh on the wallet!

In 2009 Dubuisson decided to adopt this style as their own, and we now have the ‘Bush with Peaches’.   The brewery still mix the Bush Amber but now use natural peach extract to substitute for the Timmermans Geuze.

The result is a beer with a very fruity aroma.  The peaches come through strongly, with even a hint of mango.  This follows through in the flavour, with a tropical fruit sweetness on the front palette.  The beer never gets too sweet though, with a sustained level of hop bitterness.  Good carbonation adds a little prickle to the tongue.

This is one beer which suits being served chilled more like an aperitif.  And at 8.5%, Dubuisson believe they have Belgium’s strongest fruit beer. 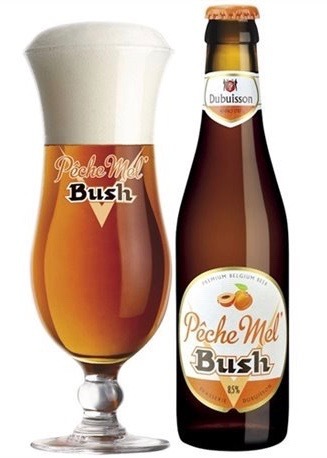 Kasteel's 11% Donker is the base, with sweet cherry liqueur added to create a perfect aperitif