This beer comes from another of Belgium’s old family breweries, dating back to 1892.  It is now in the hands of the 5th generation of this brewing family.

Located in the west Flanders town of Bellegem, not far from the French border, this brewery forms a distinctive part of the town landscape.  Formerly known as Brouwerijen Omer Vanderghinste, the name was changed to Brouwerij Bockor in 1977.

In 1970 the brewery first produced a Gueuze, and followed this up with the Kriek in 1983.

The beer is made of wheat and barley, producing a wort which is transported to open cooling vessels, then into giant wooden barrels (foeders), where the beer spontaneously ferments.  Pure fresh cherry juice is added to turn this beer into a kriek (or sour cherry beer).

It isn’t overly sour, with a good hit of sweetness early on and controlled acidity making for a very smooth, easy drinking but interesting beer.  If you aren’t a fan of sours, do give this beer a try as you may be pleasantly surprised.

See all of the July 2016 monthly six pack 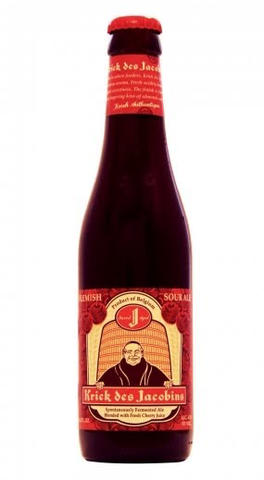