This beer no doubt features on the beer bucket list of many a Belgian beer lover.

It has been voted 'Best Beer in the World' multiple times, and while it is an amazing beer, the exclusivity also plays a part in its renown.

For those that don't know about this beer, it is from the St Sixtus Trappist Monastery in West Flanders.

It is known as on of the more reclusive monasteries, with the fame of their beer sitting uncomfortably for them.  Beer (and cheese) is made for the sole purpose of rasing funds for the operations of the monastery, and the charitable works in the community.

As such, supply of the Westvleteren beers is really limited.  The only way to officially purchase the beer is from the side door of the monastery.  The old ordering system used to be as follows:

- once or twice a month, the ordering phone line was opened, and manned by a single monk for as long as it took to take orders for all the beer that was made available (usually only a couple of hours)

- to ensure the beer was shared around, you could not call from the same phone number for two months

- they generally advised what beer they would reserve for you (you often didn't get a choice!), and they would advise the date and time to visit the monastery

- you had to supply your number plate, and couldn't use the same vehicle for two months in a row

- if all the conditions were satisfied, and you turned up at your alloted time you were given one full carton (24 bottles) of the famous Westvleteren beer in the iconic rustic wooden crate.  If there were a reason to sell more beer than normal, and you timed in, sometimes you could land two cartons.

But that was the only way to officially get this beer.  There was no such things as distributors or wholesale partners.  It is what made getting the beer so very hard - and also made the secondary market for this beer so very expensive.

From our many trips to Belgium over the years, and our many friends and acquaintances, we are ablt to source this beer twice a year, but only in really limited quantities of 4-5 cartons.  We generally share this among our favourite wholesale customers, but have kept back a few bottles to offer to our beer members.

So if you've ever fancied trying a Westvleteren but could never find one, now you know why.  And here's your chance!

(PS. Very recently they've updated the ordering system to be automated.  Apparently the job of taking the orders was very stressful for the chosen Monk!) 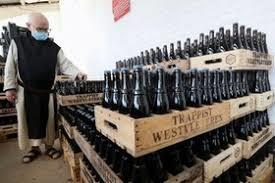 Price
$31.67
Availability
Members Only
Stock Level
Out of stock
Max Per Order
1

One of the highest rated beers we've ever brought in!

A dry hopped Barley Wine of 10%

A soft, hazy IPA featuring loads of Mosaic hops with support from some Citra and Loral