This is another sour alert for our members who aren’t (yet) partial to the pucker!  We’ve had several sour beers over the past few months, and I wouldn’t normally put them in so frequently, but sometimes I think beers are too good to leave out.

And so we have Rodenbach’s Alexander, and what a joy it was to find they were now packaging this in the much more affordable 330ml bottle format.

Rodenbach Alexander was first made in 1986 to celebrate what would have been the 200thbirthday of Alexander Rodenbach.  He was one of four brothers who started the Rodenbach brewery back in 1821.  From when this beer was first brewed in 1986, it took another 30 years for the beer to become a regular in the Rodenbach portfolio.

And thanks goodness it has.  The beer is the Rodenbach Grand Cru (a mix of 2/3 old beer aged 24 months in barrels, with 1/3 young beer) then macerated with sour cherries. It makes for a very inviting beer which is at once fruity and sweet and then tart and acidic.  It might even convert some sour-phobes! 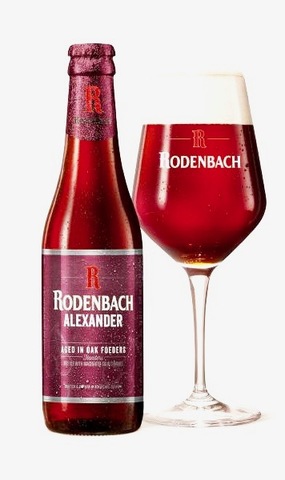