Here's your chance to grab a few beers that won't be making an appearance in the beer club packs.  Four hop-driven delights from two of our favourite breweries:

Uiltje El Patron 8.2% (440ml can) - this is the second time they have brewed this beer after it was such a success the first time around.  A slightly hazy North West Double IPA featuring Chinook, Simcoe, Citra and Mosaic hops.  Canned 10 July 2020.

Uiltje Muhammad Owlie 8.0% (440ml can) - a Brut Imperial IPA that is includes flaked rice in the malt bill along with a generous helping of Chinook, Simcoe, Mosaic and Nelson Sauvin hops.  Canned 14 July 2020.

Kees Kveik IPA 7.0% (330ml can) - this was my first Kveik (a Norwegian farmhouse yeast strain) IPA, so not really sure how to judge it.  I certainly enjoyed it - crisp malt body, quite fruity with passionfruit and citrus, something a little earthy (which I'll put down to the Kveik) and really quite dry on the finish.  Features Azacca hops - also a new one for me! 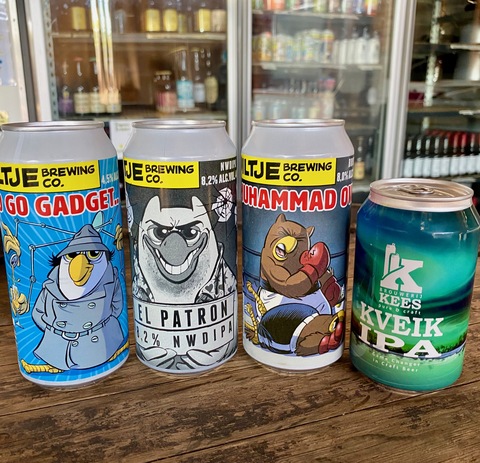 Price
$32.00
Availability
Members Only
Stock Level
Out of stock