Most of you know our Dutch brewery Het Uiltje by now, but for the new members that aren't familiar with them, they are our only specialist IPA brewery.  They are also known as the best IPA brewery in The Netherlands.

So we are always more than a little excited to receive new beers from them, just as we are the selection below.

None of these cans will make it into future beers packs (though we have a few others from Uiltje that will of course), so this is your chance to get them fresh off the docks.

This was in fact the original beer that served as a recommendation from De Molen's brewers that we should look at importing beers from Uiltje.  It is a New England style double dry-hopped DIPA that features pilsner malt, wheat malt and flaked oats.  And a shit-ton of Mosaic hops!

Always fans of classic cartoon references, this beer is an ode to the colour-coded, spandex-wearing Power Rangers.  But with a Pacific theme given the hop choices of Ekuanot, HBC 568, NZ Blend and Nelson Sauvin.  A tasty beer that comes in an awesome-looking can.

Created to combine their favourite characteristics from some of their 'tough guy' beers, it combines pilsner malt and flaked rice with Equanot, Pahto, Talus and Sabro hops.

A different take on a Christmas beer, but brewed for the festive season nonetheless.  This is a bone dry double dry-hopped DIPA that uses crisp extra pale malt plus flaked oats along with Amarillo cryo, Idaho 7 cryo and Mosaic hops. 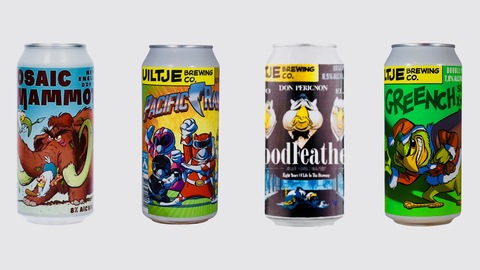 It is our first container tasting in over a year...hooray!!!