Over the past year we've been collecting small amounts of some exciting beers - and I've been talking about this sour pack for way too long.  But here it is.

Twelve very special, very interesting sour or farmhouse style beers from twelve different breweries.   These beers don't form part of our wholesale range, and a few are one-off collaborations.  So it may be your only chance to try some of these.

Take a look at the list below - this is a pack only for the serious beer lover!

We've limited the purchase to one each for now (total of 30 packs).

We had to include a Cantillon in the list, but boy they are hard to get in any quantity!   This organic beer is a blend of lambic with cherries.  Bottled June 2017.

A version of 3F Kriek which does not take up secondary fermenation in the bottle.  A stiller, fruity and more tart version of the Kriek.  Bottled May 2017.

De Troch are probably most known for the 'Chapeau' range of fruited lambic.  But their best beer is this traditional Oude Gueuze.  Not a common sight, even in Belgium.  This batch is bottled September 2018.

The new lambic kids on the Brussels block.  Judge them by their traditional gueuze.  This is one of the earlier batches bottled in March 2018.  Jean Van Roy is a fan apparently, so no small praise there!

La Calavera have been doing their thing in the Spanish city of Girona since 2012.  Known for producing very natural beers, they describe themselves as 'beer traffickers'.  They tend to the creative and adventurous side of breweing, with lots of barrel aging, sour and funk.

Godless is a blond sour ale aged in red wine barrels.  It provides a lovely pink hue to the beer as well as a red berry charcter to the taste.  Pleasantly acidic and quite funky, there is hints of citrus, green apples, leather and wood.

From Colorado Springs, this US brewery specialises in farmhouse and barrel aged sours, and brewer Jason is somewhat of a mad scientist when it comes to yeast.

As the brewer describes the beer: 'It is brewed with a first and second 'slims' process, and a malt bill built with 30% raw wheat and 30% chit malt to dramatically drive up starches and proteins.  Soured with an advanced and progressive method utilising a hot fermentation in the kettle with Lactobacillus followed by a cool fermentation on Brettanomyces; making this beer anything but simple!'

From one of Belgium's newest breweries, La Source Beer Co found a home in Brussels since October 2019.  They've been producing an excellent range of beers of differing styles.

Couleuvre is a sour DIPA.  With a gentle acidity and lovely tropical fruit notes from dry hopping with Sabro, Mosaic and Citra hops, this beer is far too easy to drink for the ABV.

Possibly the longest beer name we've ever had from one of Belgium's newest breweries.  Calling Ghent their home, this new team of beer and brewing enthusiasts have been wowing beer lovers with their interesting and well made beers.

This beer is a collaboration with the La Zorra Taproom in Argentina.  They've chosed an Imperial Saison with a malt bill consisting of malted barley, rye and wheat, hopped with Magnum and Nelson Sauvin hops and fermented with a French saison yeast.  A super tasty, fruity, spicy, funky beer that is dry on the finish.

Dois Corvos Cervejeira is renowned as Lisbon's best and funkiest craft brewery, and one of the best Portuguese breweries around.  They've been making their beers since late 2013, and have built a strong following in that time.

Saison By The Sea is an imperial saison hopped with Sorachi Ace and aged in white wine barrels.  This combines for a floral, slightly peppery and citrusy flavour.  There is a mild farmhouse funk and then the lovely wine white and oak character that lifts the beer up and adds the complexity to the aftertaste.

A Barcelona-based brewery operating since 2016 which focusses on the cultivation of mixed fermantation wild ales.  Perfect for this pack!

Rose-Marie is a fruited Berliner-Weisse, and a collaboration with Nanobrasserie L'Ermitage from Belgium.  It is brewed with 20% rye, grapefruits from the family farm, hand-foraged rosemary and dry-hopped with East kent Goldings hops.

Mildly funky, moderately sour with the tartness from the grapefruits this beer is super refreshing and tasty to boot.

Hof ten Dormaal are a farmhouse brewery from the village of Tildonk, near Leuven to the north-east of Brussels.  Known for producing their own barley, wheat, spelt and Magnum hops on their farm, they mainly brew saisons and farmhouse ales.

Zure Van Tildonk (literally 'sour from Tildonk') is a special spontaneously fermented beer using ambient yeast from the brewery-farm in Tildonk.  Each batch of is carefully aged in the cellars of Engelburch Monastery for several months prior to release.

Very funky with a firm acidity, and just enough of a hint of sweetness to balance things out.

This is a collaborative brew between Alvinne and Hair of the Dog for the USA.  The beer is a blend of Alvinne Cuvee Freddy Oud Bruin with Hair of the Dog's Fred American Strong Ale.  The beer was brewed at Alvinne back in August 2017.

It is really out-of-the-box, but lets call it a sour barley wine! 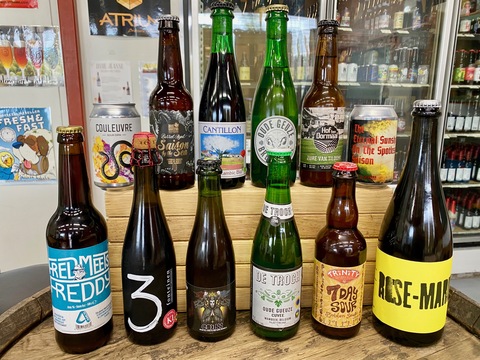 Price
$175.00
Availability
Members Only
Stock Level
Out of stock