Many craft beer enthusiasts cut their teeth on a bottle of Chimay, one of the few ‘proper’ international beers that were fairly readily available when there wasn’t alot.  So most are familiar with the Chimay trio of Red, White and Blue.

Doree is the fourth of the Chimay beers, though it isn’t exactly a new beer.  It is the ‘patersbier’ (translates as Father’s beer), meaning it is the table beer of the monks.  So while it has been brewed for some time, it was only made available to guests of the abbey; and the monks themselves of course.

In 2013 this beer was made available on tap in the café opposite the Trappist Monastery, and proved to be very popular.  It was then made available in keg and bottle to some export markets, and later more generally though it is less widely available than the other three beers.

To ensure the monks can function, the beer is much lower in alcohol than the other three styles.  It is said to be brewed with similar ingredients to the Chimay Red, though with paler malts.

A golden colour with hints of orange peel, coriander, pale malt and Belgian yeast.  Like a cross between a Belgian witbier and a very soft tripel.  The Monks suggest this as a perfect spring time beer.  Perfect! 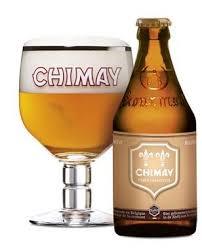