You've Got Me Over A Barrel

We've put this pack together for the true beer geek, and make no apologies for that.  It containers 6 of our most interesting barrel aged beers from 6 different breweries who specialise in barrel aging.

There is certainly an art to knowing just how long to leave a beer sitting in a barrel, and the beers in this pack show that these brewers know exactly what they are doing!

1.  De Molen Push & Pull 10.5%  (330ml) - from the Dutch masters of barrel aging, they describe this beer as a Tiramisu Imperial Stout.  Using a range of different malts with the addition of almond, chocolate, coffee and vanilla extracts then delicately aged in Bourbon barrels, this beer is a liquid after dinner delight

2.  Trinity TPS Report 4.8%  (375ml) - from Colorado Springs in the US, Trinity is known for their saisons, farmhouse ales and barrel aged beers.  And this beer is one of our favourites.  Made using flaked oats, flaked wheat, tangerine and lemon zest, the beer is fermented with a rare variety of Brettanomyces (wild yeast).  It is then aged on French Oak Chardonnay barrels with rose petals.  There's a lot going on for a little beer

4.  Kees Barrel Project 19.09 11.1%  (330ml) - an American style Barley Wine aged in Early TImes Bourbon barrels, this beer has a rich malty backbone of caramel and toffee with hints of chocolate and dried fruits, wrapped in the warm blanket of the sweet bourbon barrel traces

5.  Alvinne Melchior Calvados 11.5%  (330ml) - from Belgium's Alvinne brewery, this is a barley wine brewed with roasted mustard seeds, then aged for 8 months in barrels that previous held Calvados for 8 years and Cognac for 10 years

6.  Struise Rio Reserva 2012 10.5%  (330ml) - this beer starts as in interesting blonde quadrupel before first being aged in St Emilion oak wine barrels, then it is transferred to bourbon barrels from Kentucky.  A full 4 years in the process of aging this beer, it has been looked after for a further 3 years in bottle 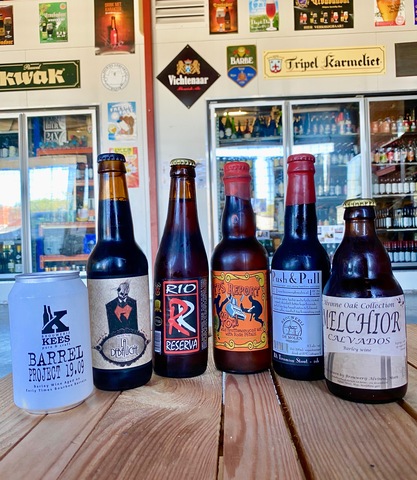 A Further Intro to Belgian Beer

A different 6-pack of Belgian treat

The second of our 'last of' packs

A collection of some more of Belgium's beer styles, if you want to try something a little more interesting!

There's More To Life Than Hops

This pack focuses on the 'other' beer ingredients - malt and yeast