If you've tried some of Belgium's more commonly available beers, here's your chance to try some more that are maybe a little harder to find.

All classic Belgian styles, these beers are from some of Belgium's smaller, family breweries as well as a beer from the best brewery in The Netherlands.

2.  Duchesse De Bourgogne 6.2%  (330ml) - this is a Flanders Red Ale, historically typical to the region of Flanders.  Colloquially known as a 'sweet and sour', this style of beer has an early sweetness that gives way mid-palate to a balsamic vinegar acetic acidity.  It is a great beer!

3.  Lefebvre Hopus 8.3%  (330ml) - this beer originated as the final year practical assignment for two brothers doing brewing university.  It went straight to commercial production (and they passed!).  A cross between a Belgian Pale Ale/Belgian Tripel/Saison

4.  De Dolle Oerbier 9.0%  (330ml) - from one of Belgium's quirkiest brewers, this is a strong dark ale brewed with lots of different malts and a special yeast for lactobacterial fermentation.  It means the beer has the slightest tartness that becomes more pronounced as the beer ages 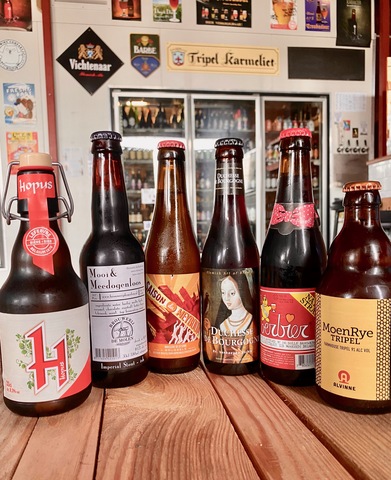 A Further Intro to Belgian Beer

A different 6-pack of Belgian treat

The second of our 'last of' packs

There's More To Life Than Hops

This pack focuses on the 'other' beer ingredients - malt and yeast

You've Got Me Over A Barrel

All barrel-aged beers, all amazing!