We’ve tip-toed around some lambics and other sour beers, but now it is time to throw the real deal your way.  An Oude Gueuze.

Lambic beers owe their unique character to the act of spontaneous fermentation.  Wort is left in ‘coolships’ (large, shallow open trays), to allow the naturally occurring airborne yeasts to begin the fermentation process.  Until recently, this magical process was confined to the Zenne valley to the west of Brussels, known as Pajottenland.

The beer is then transferred to large oak barrels, where the fermentation process continues.  ‘Young’ lambic (up to 1 year in the barrel) is mixed with ‘old’ lambic (typically 2-3 years in the barrel).  This is the real talent of the blender, as the matching is all done by taste; no high tech equipment for this task.

The young lambic still has some unfermented sugars which allows re-fermenation in the bottle, which lasts for several months.  Gueuze are the pinnacle of the lambic family, and known as the ‘champagne’ of beers.  Ideally enjoy at 6-8 degrees, and prepare to be amazed!

If ever you are in Belgium:  One of the real treats of a visit to one of our lambic brewers is a trip through the aging vaults, tasting the aging lambics straight from the barrel! 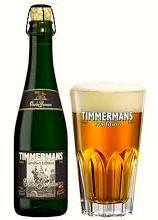 A beer made by bringing together lambic with the process used for brewing beers based on malted wheat.