Who doesn’t love a good collaboration, and here we have the joint efforts (not for the first time) of La Pirata and De Molen.

The guys behind La Pirata typically started as home brewers, who then began gypsy brewing in 2012.  By 2015 they had found a home in the Catalonian town of Suria, about 45 mins drive north west of Barcelona.

And it is La Pirata who get the ‘by-line’ for this beer, although they do cede to the De Molen naming convention.

Smashing & Grapes is a Grisette, a style which is suddenly gaining popularity though there is little in the way of documented history to the style.

The popular (at least among our brewers) story of Grisettes is they are a style of Saison/Farmhouse Ale, usually low in alcohol, brewed with malted wheat and are moe heavily-hopped than a traditional saison.  And they were originally made for miners in the Hainaut province.

This beer is a little higher in alcohol, and is made using green grapes.  The dry-hopping is with Huell Melon and Mandarina hops.  As you might expect the beer is crisp, slightly tart with some citrus, funky farmhouse yeast and it finishes bone dry. 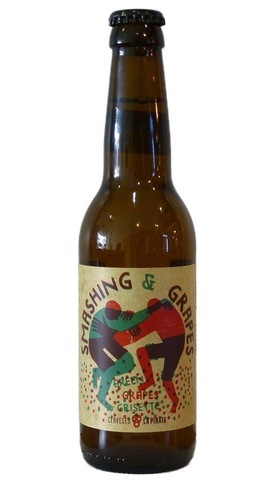